The group that became TEAM first met in 1958 when several area transportation engineers met informally during lunch to discuss local transportation issues. "After much consideration" the then "Metropolitan St. Louis Traffic Engineers" chose the name "TEAM" and voted to accept their first formal organizational charter at their December 15, 1960 meeting. Dan Hanson from St. Louis County was elected as the new organization's first president serving through 1961. The transition is described in a memorandum written on December 21, 1960.
Although not a part of ITE, this new organization played an active role with ITE in bringing the 37th Annual ITE meeting to St. Louis in September of 1967. The group also co-hosted several joint meetings with MOVITE, including: Spring 1960, Fall 1974 Spring 1982, and Spring 2001.
In the years between 1960 and 2002, TEAM grew into a strong organization of over 100 members. This group continued to gather regularly at lunch to further traffic and transportation knowledge and stimulate professional improvement of it’s members; foster closer association between persons with mutual interest in the traffic and transportation field; and develop cooperation for the betterment of traffic and transportation in the St. Louis metropolitan area.


Because the mission and purpose of TEAM closely reflected the mission and purpose of ITE, the TEAM membership voted on April 16, 2002 to petition MOVITE to become an ITE Chapter. After reviewing their proposed charter and bylaws, and after having received the petition from the TEAM membership, the MOVITE
Board of Directors, at its April 24, 2002 Board Meeting in Oklahoma City voted unanimously to accept TEAM as a chapter. TEAM celebrated its new affiliation with ITE at its September 17, 2002 meeting as Mike Gorman, MOVITE's president, presented Dave Christensen, TEAM’s president, with TEAM’s approved ITE Chapter Charter. The original TEAM petition currently hangs at MoDOT’s Transportation Information Center, in Town and Country, Missouri.

In 2021 the organization was elevated to a Section of the Institute of Transportation Engineers and was rebranded as Gateway ITE. 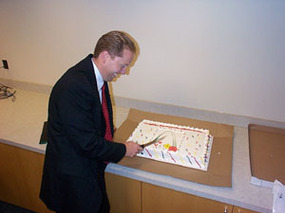